The purpose of this blog is purely educational. It does not advise any reader to forgo medical treatment for any condition. It describes methods that have not yet been proven effective through widespread scientific testing. Readers who are concerned about their health are advised to contact their physician.

Is fighting cancer the right strategy?

My attention has lately been riveted by posters on the subway shouting "Join the fight!" and asking "Who are you fighting for?"

These posters are funded by the Canadian Cancer Society and they invite you to visit a website called "fightback.ca". On the website you are informed that "April is the month to fight back" and that "every three minutes another Canadian is faced with fighting cancer". The Society invites you to buy a daffodil in April to show your support, because the daffodil "is a symbol of strength and courage. A symbol of life. It says we will not give up. It says we will fight back. It says we will beat cancer. Join the fight." 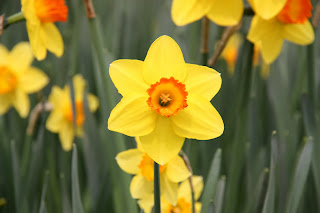 We have been fighting cancer for a long time, with dubious results. Forty years ago President Nixon officially declared war on cancer, making "the conquest of cancer a national crusade." Thirty-seven years later, in 2008, a headline appeared in Newsweek: We fought cancer and cancer won. The thoughtful, well-researched article attached to this headline suggests that "After billions spent on research and decades of hit-or-miss treatments, it's time to rethink the war on cancer."

Indeed it is, not only because the war is being lost on multiple fronts, but also because it is being fought in and over the bodies of millions of cancer sufferers, who often end up as collateral damage. According to Ms. Begley, the author of the Newsweek article, the investment of two-hundred billion dollars in cancer research since 1971 has produced an estimated 1.5 million scientific papers, but no reduction in overall cancer deaths.

Most of the scientific studies funded by the campaign to beat cancer have had little or no impact on the lives of cancer patients in the real world. "Indeed, it is possible (and common)," Ms. Begley writes, "for cancer researchers to achieve extraordinary acclaim and success, measured by grants, awards, professorships and papers in leading journals, without ever helping a single patient gain a single extra day of life." Many exciting scientific findings turn out to be "interesting but irrelevant to patients," so perhaps throwing more money at more scientific research on the minutiae of cancer is not the right and only answer.

Cancer is a disease with many facets, and it morphs to find its way around the "weapons" thrown at it by science. "Just as cancer cells develop resistance to standard chemo drugs, so they are finding ways to elude the new targeted drugs such as Avastin, Gleevec and Herceptin," writes Ms. Begley. If one route to their proliferation is blocked, they will find another. According to oncologist George Demetri, "By the time there are 10 cancer cells, you probably have eight different cancers. And there are different pathways in each of the cells." That's how complex cancer is.

I would like to propose that what we want to do is not wage war on cancer, but find ways of "waging peace" with it. By that I mean we should not try to eradicate these rogue cells by every deadly means at our disposal -- often causing irreversible damage to the patient receiving the so-called treatment -- but instead aim to bring them back into alignment with the body. When we are waging war on them, they clearly outsmart us, and have been outsmarting us for decades. But what would happen if we spent our research dollars on "waging peace" instead? "Waging peace" is what energy healing therapies do. Update Jan. 16, 2012: Also read my posts "Anatomy of a miracle", "Why is meditation a good prescription for cancer patients?", "Open letter to oncologists", "Using qi gong visualisations for cancer patients", and "Radical love and cancer".
Posted by Judith at 4:04 PM

I totally agree with your plea for us to shift our approach. What you describe parallels the history of waging war on agricultural pests. You can use DDT, which only works for awhile, until the bugs mutate beyond it, and meanwhile, it kills the rest of us. Or you can use companion plants to attract beneficial insects and naturally repel harmful ones. There are some wineries switching over to companion planting, so they don't have to nuke the heck out of the grapes, and give people poisoned wine. Not to mention poisoning the ag workers.

I guess the trick is to figure out what the best healing equivalent of "companion planting" might be.

Well put. I think anything that nurtures body/mind -- good diet, supplements, physiotherapy, psychotherapy, energy healing would be the equivalent of "companion planting." And anything that nukes the *illness* -- chemo, Western medications (which are ultra-powerful and coercive), surgery would be the equivalent of DDT. This is the problem with Western medicine today -- it tries to make the illness submit, instead of supporting the individual's natural tendencies to be well.

I don't know if there is anything in energy healing that would be the equivalent of "DDT". Kurt Peterson, a cancer healer, calls what he does the "DNA Signature Destruction Method", and he says it is a method he developed to cause cancer cell apoptosis. This is on his website, http://www.cancertouch.com. Now the question is whether the method kills cancer cells (the DDT equivalent) or simply returns them to normal, so they die at the end of their lifecycles as a normal cell would.

Do you have knee pain or a frozen shoulder? Visit my blog on treating pain and injuries with energy healing. During the pandemic I am offering Zoom and Skype treatments by donation. This is an opportunity for you to find out what energy healing can do for you.
Click here to get in touch.

Exciting news: a reader named John Hill wrote to me to say that he used qi gong visualisation to treat his 93-year-old mother, who had termi...

Click on the image to purchase Lissa Rankin's new book on Amazon
The amazing Dr. Lissa Rankin on the mind healing the body

I wonder: does energy healing activate the placebo effect?

Bioenergy therapies can help you maintain your emotional equilibrium in the face of a cancer diagnosis and help you improve your quality of life as you confront the challenges of your illness.

New: interview with Dr. Claude Swanson on the science behind energy healing:

The purpose of this blog ...

is primarily to provide an educational resource on the use of bioenergy healing in the treatment of cancer. Posts in this blog reflect my own thoughts, opinions and experiences. Others whose thoughts, opinions and experiences differ from mine are welcome to express their disagreement. For commentary on the Bengston method please see my posts in 2008 and 2009. Please note that some of the posts may now be outdated, as there may be new information available that I am not aware of. I encourage you to do your own research. Also, be aware that practitioners are unregulated and will vary in the quantity and quality of their training, and that the limited scientific evidence that energy healing can have a curative effect on cancer has only been demonstrated in mice. If you believe you are suffering from an illness, consult with your physician, but do consider energy healing for wellness support in your recovery.

Judith
I have been working with "energy" since 1999, when I first learned Reiki. I've also studied martial arts, qi gong, an American form of energy healing called Quantum Touch, and from February 2007 to October 2008, the Bengston method. I found Dr. Bengston on the internet and persuaded him to teach public workshops on his healing method. We did 6 workshops together in Toronto in 2007 and 2008 before he moved on to teach in the US. In 2009 and 2010 I learned Matrix Energetics and the Domancic Method and in 2011 the "Russian Organ Regeneration" method and BEAM Therapy. I now use these modalities singly and in combination, and I consider myself a "specialist" in the treatment of knee pain. Some of my colleagues have adopted the Domancic Method for the treatment of organic diseases because of its ease of use, its clarity, and its long history of clinical application, to support patients in their healing. As a "frequent consumer" of bioenergy healing training courses I can now also comment fairly knowledgeably on prices and value.

This link has been added at the request of the Mesothelioma Association.