The purpose of this blog is purely educational. It does not advise any reader to forgo medical treatment for any condition. It describes methods that have not yet been proven effective through widespread scientific testing. Readers who are concerned about their health are advised to contact their physician.

A recent blog post from Indiana University reveals that healing energy can be measured using a geomagnetometer (also known as a gaussmeter). The experimenter was inspired by two previous studies that had shown magnetic field variations near the hands of trained healers. In this case, however, the changes in the magnetic field did not occur in the vicinity of the healer, but near the recipients of the healing, a cage of mice with cancerous tumours. The magnetic field changes appeared "in waves that resembled symmetrical 'chirp waves,' with a decrease in frequency of the oscillations followed by an increase in frequency," in effect going from random noise to organized wave activity, and then back to random noise again. When the same experiment was repeated with the healer over 600 miles away, the same oscillations appeared during the healings. The experimenter concluded that "the magnetic field activity observed during distant healing was identical to that observed during hands-on healing (on-site), suggesting a common mechanism for both types of healing." The treated mice recovered. 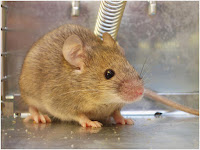 Do you have knee pain or a frozen shoulder? Visit my blog on treating pain and injuries with energy healing. During the pandemic I am offering Zoom and Skype treatments by donation. This is an opportunity for you to find out what energy healing can do for you.
Click here to get in touch.

Exciting news: a reader named John Hill wrote to me to say that he used qi gong visualisation to treat his 93-year-old mother, who had termi...

Click on the image to purchase Lissa Rankin's new book on Amazon
The amazing Dr. Lissa Rankin on the mind healing the body

I wonder: does energy healing activate the placebo effect?

Bioenergy therapies can help you maintain your emotional equilibrium in the face of a cancer diagnosis and help you improve your quality of life as you confront the challenges of your illness.

New: interview with Dr. Claude Swanson on the science behind energy healing:

The purpose of this blog ...

is primarily to provide an educational resource on the use of bioenergy healing in the treatment of cancer. Posts in this blog reflect my own thoughts, opinions and experiences. Others whose thoughts, opinions and experiences differ from mine are welcome to express their disagreement. For commentary on the Bengston method please see my posts in 2008 and 2009. Please note that some of the posts may now be outdated, as there may be new information available that I am not aware of. I encourage you to do your own research. Also, be aware that practitioners are unregulated and will vary in the quantity and quality of their training, and that the limited scientific evidence that energy healing can have a curative effect on cancer has only been demonstrated in mice. If you believe you are suffering from an illness, consult with your physician, but do consider energy healing for wellness support in your recovery.

Judith
I have been working with "energy" since 1999, when I first learned Reiki. I've also studied martial arts, qi gong, an American form of energy healing called Quantum Touch, and from February 2007 to October 2008, the Bengston method. I found Dr. Bengston on the internet and persuaded him to teach public workshops on his healing method. We did 6 workshops together in Toronto in 2007 and 2008 before he moved on to teach in the US. In 2009 and 2010 I learned Matrix Energetics and the Domancic Method and in 2011 the "Russian Organ Regeneration" method and BEAM Therapy. I now use these modalities singly and in combination, and I consider myself a "specialist" in the treatment of knee pain. Some of my colleagues have adopted the Domancic Method for the treatment of organic diseases because of its ease of use, its clarity, and its long history of clinical application, to support patients in their healing. As a "frequent consumer" of bioenergy healing training courses I can now also comment fairly knowledgeably on prices and value.

This link has been added at the request of the Mesothelioma Association.